UNION is pleased to present the first solo exhibition in London by Swedish artist Anders Krisár.

Krisár explores interpersonal relationships and examines the complexities of the human condition by deconstructing and adulterating the figure in his sculpture and photography. His conceptually motivated work is explicitly subjective yet also focuses on universal oppositions between the self and the other existing particularly in domestic relationships. Familiar dichotomies such as mother/son, adult/child, past/present and pleasure/pain are central to his work. Investigating how past experience and memory moulds the human psyche, his works are often disarmingly direct responses to psychological distress or emotional dissent.

Krisár’s wall mounted sculptures ‘The Birth of Us’ (2007) comprises of two oil painted fibreglass figures. Unnerving in their technical accuracy these works represent the torsos of a young boy and girl. Across the immaculately rendered surface of this work the figures bear deep gestural gouges - ambiguous indications of physicality – hands laid across the body either in violence or embrace.

Notions of attraction and repulsion, distance and proximity are evident in the almost dicephalous two part sculpture ‘One as two (3)’ (2005) which consists of two aluminum masks – one a cast of the artist and the other his mother. This largely autobiographical work represents the emotional and physical tension of this mother/son relationship. The use of strong magnets allows the cast of the artist’s face to be inextricably drawn towards that of his mother. Facing one another, the two faces are poised in mid air whilst a wire attached to the wall acts as a restraint drawing the artist away from the pull of his mother and affirming his otherness.

Similarly, these dualities of distance and proximity, interior and exterior are relayed in ‘You're Going Nowhere’ (2007). This floor based piece consists of a child’s rucksack filled with lead. The immovability of the work in terms of its weight and the addition of the title allude to both familial security and restriction.

Recent photographs by the artist allow tangible and spectral elements to meet and exist within a pictorial space - his use of a long exposure time reducing moving figures to a mere haze of colour. These images question the relationship between the seen and the concealed, truth and hallucination. 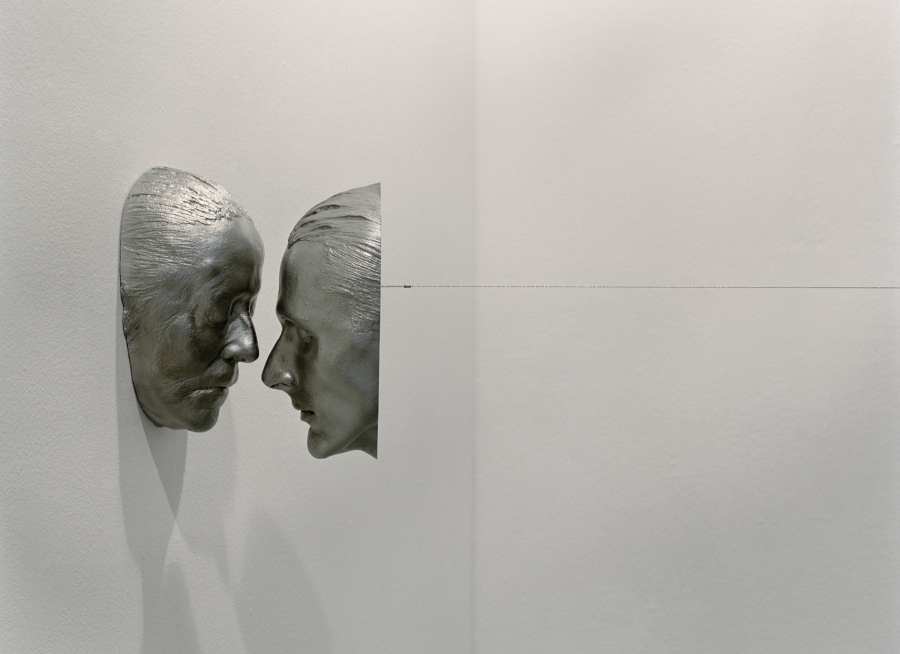