Swedish artist Anders Krisár, born 1973, has emerged fast on the Swedish and international scene after his first exhibition at Mia Sundberg Galleri in  2003. His book Chords No. 1-17 was voted "Best Swedish Photography  Publication" the same year. Since then he has exhibited in various venues in  Sweden and abroad, notably at Galerie Lelong in New York in 2003. This is his third solo show at Mia Sundberg Galleri. His second solo show at Galerie  Lelong is planned for the end of this year.

Anders Krisár works consistently with photography and sculptural objects. His work is invariably executed with the utmost technical precision and attention to  detail. It is conceptually motivated and increasingly self-biographical in content. Indeed it could be labelled self-reflective in the literal sense. Casts and images of the artists own body, as well as those of his closest  family, feature prominently in his recent productions. These are often disarmingly direct illustrations of psychological distress, throwing the light of artistic professionalism on things that usually remain hidden in the realms of privacy.

In the exhibition, several new works are premiered, all of which date from 2005-2006. Cuirass (Front) and Cuirass (Back) (both 55 x 40 x  15 cm) consist of naturalistically painted silicon casts of the artists and his older brother's torso. The two doppelgänger have been surgically sliced  and then pleated to form a composite creature, an uncannily symbiotic New Man. The two brothers return as a barely visible presence in Mist Mother (C-print, 180 x 143 cm). At the time of exposure they had in fact stripped  naked and were running in circles in front of their mother, whom we see standing still, emerging from behind aflesh-coloured blur in a statuesque floor-length dress. Medicine Mom (24 x 15 x 9 cm) is a cast of the mother's face, made up of pills (pilfered from her real-life medication by the artist) held togetherby nothing but small quantities of a strong glue.

Wheel of Fortune  (14) (40 x 40 cm) consists of 14 pills arranged in a circle on the wall. The first one is  supposed to treat manic depression, but its side effect is an induced lack of thyroid gland hormone. The pill that takes care of that causes insomnia, but the sleeping pill gives you diarrhea, and the stomach pill makes you nauseous. The following pills cure and cause a dry mouth, headaches, nausea  again, weight gain and insomnia again. This brings us to a new sleeping pill, the side-effect of which is manic depression. Wheel of Fortune (10) (35  x 35 cm) denotes a similar process in 10 stages, starting and ending with anxiety.

Anders  Krisár's content-driven and visually succinct new exhibition is ample evidence that his insights into the depth-psychology of artistic practice are steadily growing. Surfaces are still important, and still polished, but they now incorporate darker, coarser strata. Anders Krisár emerges as an artist on the way to exploring his very own abyss. As far as we can see, the path ahead of him is shining. 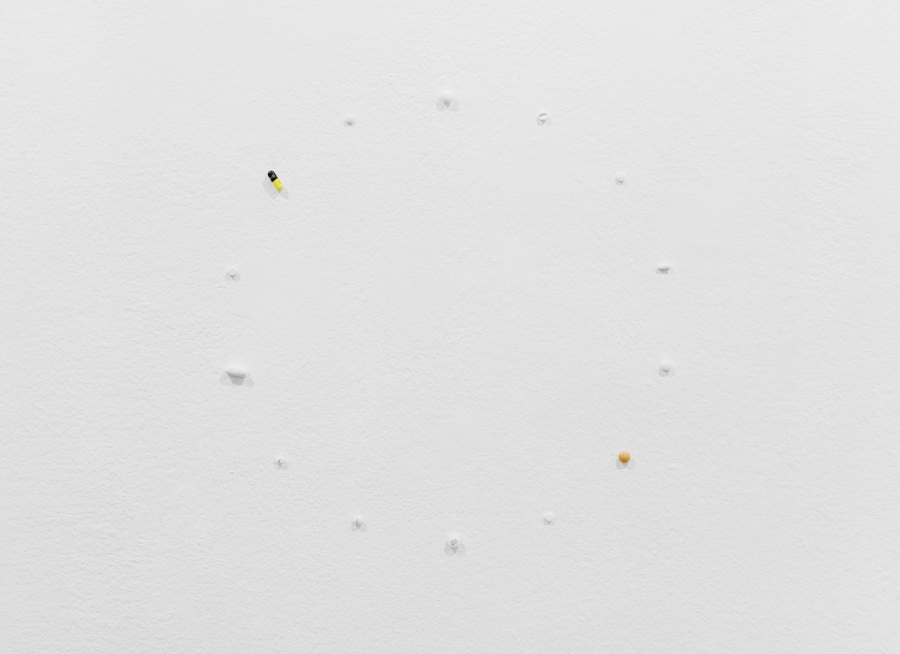